Live Life With No Regrets! Follow These 7 Lessons From Barbara Bush 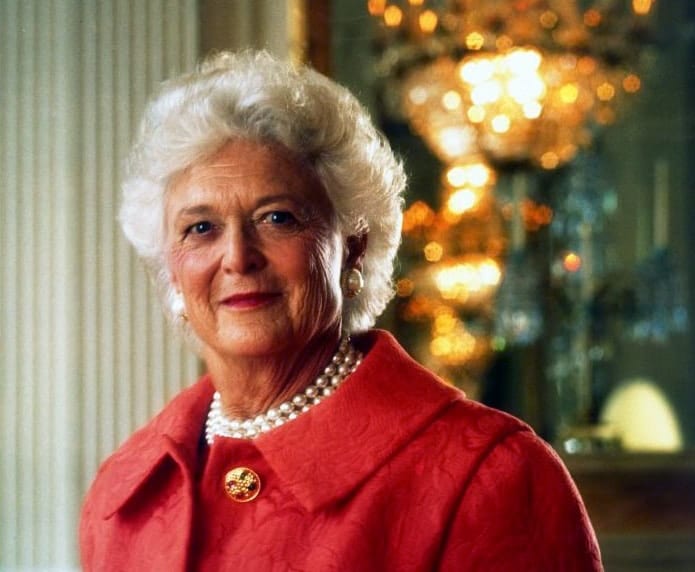 Barbara Bush “got it.” She knew what life was really all about: Nurturing relationships and helping others. She valued her family life and helped people of all ages and backgrounds recognize their worth and reach their potential.

For Barbara it was never about celebrity or wealth. In fact, she proudly rejected a luxurious lifestyle. She wore fake pearls and insisted to the Secret Service that she travel in a small car (no limousine for her) and on a commercial airline. She later accepted the private plane because of the guilt she felt holding up the line at the airport!

Barbara was the epitome of strength, grace and dignity—as well as just a freaking cool person!

She inspired me and many others, and had so much wisdom to share. Here’s what we can all learn from the former First Lady:

Barbara understood that life is supposed to be fun. As she said in her commencement speech at Wellesley College, one of the reasons why she decided to marry George Bush is because he made her laugh.

“It’s true, sometimes we’ve laughed through our tears … but that shared laughter has been one of our strongest bonds,” she said. “Find the joy in life, because as Ferris Bueller said on his day off: ‘Life moves pretty fast. If you don’t stop and look around once in a while, you’re gonna miss it!’”

The fact that Mrs. Bush quoted Ferris Bueller in a commencement speech shows just what a great sense of humor she had!

Have fun and laugh often. Be willing to laugh at yourself—something that Barbara was particularly good at!

2. Cherish your relationships with your family and friends.

Family was a huge priority for Barbara. She moved with George many times for his career, when he was in the Navy, the oil business and then for his political career. He had to travel a lot, and she was often left alone with their six children. It was hard being the “mother and father sometimes,” as she put it, but it was all worth it to her.

As Barbara famously said, “At the end of your life, you will never regret not having passed one more test, not winning one more verdict or not closing one more deal. You will regret time not spent with a husband, a child, a friend or a parent.”

2. Dedicate your life to something larger than yourself.

“Get involved in some of the big ideas of our time,” Barbara said. “I chose literacy because I honestly believe that if more people could read, write and comprehend, we would be that much closer to solving so many of the problems that plague our nation and our society.”

Barbara felt a personal connection to literacy, as her son Neil was dyslexic. After he was diagnosed, she started learning about literacy and her passion grew. While First Lady, she founded the Barbara Bush Foundation for Family Literacy, which provides scholarships to low income families so they can learn how to read and write together.

What big idea are you dedicating your life to? Throwing yourself into a cause that you feel passionate about will give you a sense of purpose—and the thrill you get when you help someone else is unlike anything else!

4. Be proud of who you are. Don’t try to be like anyone else.

On Fresh Air, Barbara said that her dad used to tell her before a date that “it’s nice to be natural and you’re naturally nice.”

“I wanted to kill him because I was hoping to impress someone with how sophisticated I was,” Barbara said. “But having said that, that’s probably true. I decided that I would not – after a little struggle – that I would not try to be something I wasn’t.”

She followed through on that promise throughout her time as First Lady. Despite pressure to dye her hair, she chose to keep it white, and she proudly wore her fake pearls everywhere.

“The pearls are to cover the wrinkles, which they no longer do,” she said on the Today show in 2015. “You can’t wear pearls all over your face.” 😆

Don’t listen to what other people say you should be. Just stay true to yourself, and everything else will fall into place.

Barbara’s beliefs sometimes conflicted with the Republican Party, but she wasn’t afraid to stand up for what she believed in. She supported the Equal Rights Amendment and a woman’s right to choose.

“When push comes to shove, I myself would never have an abortion,” Barbara said. “But having said that, I can’t make that judgment for someone else.”

Living an honest and authentic life is about holding onto your beliefs, no matter how unpopular they might be.

Barbara faced many challenges in her life, and instead of letting them derail her, she used them to fuel her personal growth.

Her son Neil’s dyslexia ignited her passion for literacy. Her own struggle with depression made her “much more sympathetic to people who have problems.” And when her second child died of leukemia at age 3, Barbara devoted herself to cancer research and helping cancer patients.

The challenges you face in your life are all opportunities to improve yourself and help others. Embrace them!

7. Inspire and help others. Learn from people who are different from you.

Barbara sincerely cared about other people. While she helped others through her charities, she also touched people one-on-one. Since she passed, many firsthand accounts have been written by people who met Barbara and were personally touched by her.

Historian Timothy Naftali, who had lunch with the Bushes in 2015, talked with Barbara about LGBT issues. Naftali himself is gay, and Barbara was curious about the current wave of transgender awareness.

“What I will hold especially dear is the personal experience of her willingness not only to learn about people she didn’t understand, but to recognize she might have been wrong about them,” Naftali said. “And she did this at 90.”

Football player JJ Watt met Barbara while filming a video for literacy. He was blown away that Barbara showed up wearing football pads and eye black.

“If we’re going to tackle illiteracy here in Houston, JJ,” Barbara said in the video, “we’ve got to get our game faces on.”

“She provided an excellent example of what it meant to live a life in service to others,” Watt said.

“With her literacy campaign, all way up to the very end, she wanted to do things to help other people. The greatest lesson I learned from Barbara Bush was if we all do a little bit to help our fellow human each day, we’re going to leave the world in a better place than we found it.”

And, of course, many people remember the photos of Barbara visiting AIDS patients in 1989, at a time when people didn’t understand the disease and were afraid it could be spread through touching.

Barbara had a genuine desire to care for other people—regardless of their background or circumstance—and we should all hold ourselves up to her standard.

In honor of Mrs. Bush, I have a special Mother’s Day offer for you. The Mom’s Special Gift Box Set is now available.

For every gift box you purchase, I will make a donation to The Barbara Bush Foundation for Family Literacy.

It’s a great gift for a special mom in your life and a way to honor Barbara in the process!

Let me know what you’ve learned from Barbara Bush and how she’s inspired you in your life. Which of these lessons especially resonates with you?